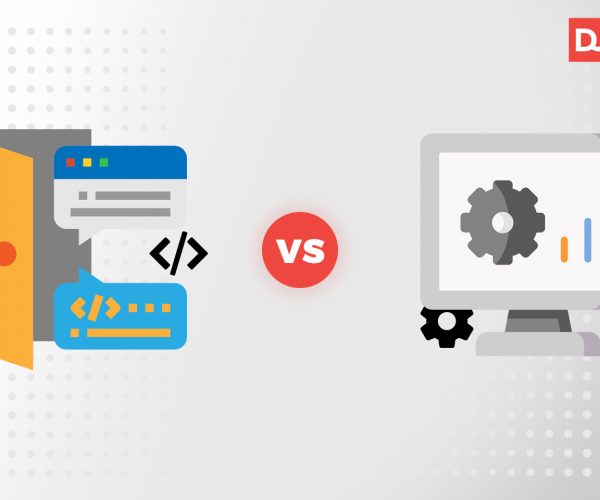 In software teams, it often happens that the team’s different roles are interconnected, and therefore it’s easy to mix them up. You might think that a backend engineer has the same roles and responsibilities as a backend developer. After all, they are part of a software team with the same project. They might even end up doing similar tasks, especially in software development Agile teams where members take cross-functional responsibilities to successfully achieve their goals.

However, the truth be told, a backend engineer is not the same as a backend developer. They do have different responsibilities and skills that, despite having similarities, also define what they bring to the table when developing software. This article put together with our Recruitment Director, Ihor Shcherbinin, will explore each role, analyzing its main characteristics and the difference between the backend developer and engineer.

What is Backend Development?

Websites and applications sometimes seem as if they worked with magic. When you’re visiting a website, you click buttons that take you to different categories, for example, our blog. Or, when you’re on websites like Amazon, you have to fill out forms with your personal information to buy something. But how does that happen? Where does that information go?

It goes to a place called the back-end. The backend simply explained refers to the development of server-side logic that powers websites and applications. It’s the behind-the-scenes part of all the actions we take in a site.

What is a Backend Developer?

A backend developer is responsible for writing the web services and APIs used by front-end developers and mobile app developers. They oversee the server-side web application logic as well as the integration of the front-end part.

Besides being in charge of the server-side logic, their primary focus is to define and maintain the central database, making sure that it has high performance and responsiveness to requests from the front-end.

What Does a Back-end Developer Do?

What is a Backend Engineer?

They set the software team’s foundations of what they need to do to achieve the main goals. This means that one of the primary functions of a backend engineer in a software development team is to write business logic, server scripts, and APIs that will later be used by the other developers and members of the team.

The day-to-day backend engineering consists of optimizing servers for speed and stability, ensuring the structure is secure, and generating reusable code libraries and data storage solutions.

Backend engineers are also in charge of:

What Does a Back-end Engineer Do?

Backend engineers have a set of skills that are necessary to perform their jobs efficiently. As stated above, they are the ones who set the path for the software team.

They oversee building the structure that a software application has. Backend engineers spend time writing server scripts and APIs that front-end engineers and UX designers will later use.

Backend engineers work on the server components of multi-tier web applications focusing on web services and data stores. Additionally, they may be involved with business rule implementation logic.

Besides the tasks explained above, a backend engineer also has these responsibilities:

This programming paradigm is based on the concept of classes and objects, which can contain data and code. Data in the form of fields and code in the form of procedures.

Its purpose is to transform a program’s structure into simple, reusable pieces of code snippets (classes) that are used to create individual instances of objects.

In OOP, computer programs use objects that talk to one another, changing the data in those objects and working in a way that the user wants.

Some of the popular object-oriented backend languages are:

Functional programming consists of a paradigm where programs are constructed by applying and composing functions.

In this programming paradigm, function definitions are trees of expressions that map values to other values rather than a sequence of imperative statements. Functions can be bound to names, passed as arguments, and returned as other functions.

Some of the popular functional languages are:

Within these two different programming paradigms, these are the most popular programming languages used in backend development:

PHP – Hypertext Preprocessor – is one of the core programming languages in the web development world. This server-side scripting language is usually used to gather the user’s information and store it safely in a database.

Python’s popularity has increased during the past years mainly because of its compatibility with advanced technologies like Machine Learning and the Internet of Things. Python’s major benefit is its extensive collection of standard libraries that make the work of developers comparatively easier.  Additionally, Python has unique features to help developers with better code readability, integration with other languages, and GUI programming support.

Java is one of the core programming languages for backend web development. It is popularly used for developing enterprise-scale web apps as well as android, desktop, and scientific applications. Java is characterized by its cross-stage capabilities and security. Developers can perform database connectivity, image processing, network, etc.

Ruby is a dynamic and open-source programming language that focuses on productivity and simplicity. One of its advantages is that it allows developers to create web apps without writing much code. They can automate repetitive tasks, build both website and mobile applications, and develop prototypes. Additionally, Ruby supports almost every major platform like Windows, Mac, and Linux.

During the last few years, C# has ranked under the top 5 programming languages. It is extensively being used in areas such as the development of Windows applications, game development, etc. The language provides faster compilation, interoperability, component-oriented and structured language, and many others. Additionally, it has a rich set of libraries that helps developers program faster and efficiently.

At a general level, backend professionals (both engineers and developers) require at least some formal training to acquire the basic skills. Many have degrees in computer science or advanced mathematics; others have courses related to the career itself.

The skills change depending on the job demands as backend development takes care of different aspects and parts. However, apart from the languages mentioned, there are other skills every backend expert needs to have, such as:

The backend engineer vs. backend developer discussion takes place because they have similar tasks and responsibilities, as seen above. However, the main difference relies on the fact that a backend engineer is mainly responsible for communicating with the company’s leaders to understand the end-user necessities. This helps them have a more comprehensive panorama into what the application’s development should be and should look like.

On the other hand, a backend developer is mostly responsible for executing the backend engineer’s plans. They have single tasks, and features that combined made the development of software applications possible.

In other words, developers are not responsible for designing the entire development system, while engineers are. Backend engineers have to demonstrate that the design and methods they’ve made for the project are viable.

Looking to Hire a Backend Engineer or a Backend Developer Fast? Go Remote

Hiring remotely gives you enormous benefits for this type of position. The primary gain of remote recruitment is widening your talent pool. You can hire skilled back-end engineers or developers from anywhere in the world. Global hiring not only gives you the chance of cutting salary costs but also to explore geographical areas based on the expertise you need. Where you can find to hire a backend developer or engineer? There are several sites where you can hire remote developers like:

Now, if you are looking for someone who traces a plan that makes your business application possible, you likely need the help of a back-end engineer. But if you need someone to be part of your development team and takes care of important tasks for the development or maintenance of your app, a backend developer is the role you are looking for.

With their similarities and differences, both roles represent a bridge between team members and clients.

Back-end developers and engineers will illustrate the site features to clients, and they must be able to explain their processes to those without a technical background. They also provide reports on project results, preparing technical documentation, and written communication about the development process. In addition, your candidate needs problem-solving, self-motivation, and time management skills. As with any development project, bottlenecks and issues can happen at any time.

When you start your hiring process, remember that these soft skills are crucial in distributed teams. Among technical skills, you need someone who can work under pressure to find original and creative solutions for your app.

And when you have the whole world in your hands just with a click, finding the perfect candidate for your project is a piece of cake!

How to Find Top Talent for Backend Engineer or Developer?

If you need help headhunting and recruiting remote IT talent, you’ve come to the right place! At DistantJob, we’ve been successfully helping companies hire talented remote techies ready to help them achieve their projects and goals.

We have simple and efficient steps to help you hire the best back-end developer candidates for your company and boost your project:

What does that mean? First, we study your company’s DNA. We talk with you and your team and understand your mission and goals. Once we know what you need, our sourcers start looking for the perfect match for your company and project. After that, it’s time to get down to business. Here it’s when we guide you through the interview process with candidates until you find the perfect fit for your team. Our job doesn’t end with the hiring process. Our amazing HR team schedules regular meetings with you and the candidate to monitor the performance to make sure we got the best match for you in the long run.

If you need hiring a back-end developer, we can help you find the right one. Reach out to us today!

1. How much does it cost to hire a back-end developer and is their average salary?

2. What is the Backend Engineer’s Salary?

3. Which Language Is Best For Backend Development?


While it depends on the type of website or application you want to build, overall, the top 8 languages for backend development are:
JavaScript – used in Netflix
Python – Used in Instagram
Ruby – Used in Github
C# – Used in Microsoft Visual Studio
PHP – Used in WordPress
Java – Used in Twitter
Perl – Used in BBC
C++ – Used in Adobe Photoshop


One of the most common perceptions is that learning frontend development is easier than learning backend. The truth is that on a beginner’s level, the front end tends to be easier. But when it comes to an in-depth understanding, both can have the same difficulty and complexity as they require patience and discipline.