Web development is a dynamic field with new languages, frameworks, and libraries introduced every year to improve programming efficiency and practices. Golang is one such language, created by Google, that improves upon existing languages like Python, C, & more. This has made Golang web development a great option for many new applications!

If you are considering hiring a GO programmer for your next Golang web development project, then read on to find out what makes this language unique, the best Golang Frameworks, its pros and cons, and a lot more.

Golang is a statically typed, compiled programming language created by Google. With statically typed languages, type checking is done during compile-time instead of runtime.

Golang combines older frameworks’ good properties such as Python, C, and more and puts them together into one package. Such properties include static typing and runtime for languages like C# and uncomplicated syntax for languages like Python and JavaScript. For the past 12 years, Go has been improved by adding new capabilities to make it a complete programming language.

Before we look at the best web frameworks for Golang, we must consider whether we need any frameworks in the first place.

The Go programming language was designed with simplicity in mind. This means that you don’t need to use a web framework in order to create a Golang website or web applications in Go.

However, there are many benefits to using a web framework, such as increased productivity, a more structured codebase, and access to a wide range of libraries and tools.

There are several Golang web frameworks for different use-cases. Here are the top five you can choose:

Gin is one of the best web frameworks for Golang. It is mainly used to build microservices. This framework has over 54k ratings on GitHub. It is used for this purpose because it makes it possible to build a request-handling pipeline to plug in middleware. Some of the top features of Gin include; error management, great performance, and creating middleware.

Echo is a relatively newer Go web framework when compared to Gin. However, it is very promising, and for the time it has been around, over 20k GitHub users have given this framework a star. Echo is ideal for people who want to build APIs from scratch due to its well-articulated documentation that is very easy to follow. Its features include letting developers define their own middleware and supporting HTTP/2.

Beego is also a popular Go framework mainly used to build enterprise-level web applications with rapid development. This Golang framework has four major parts: base modules, web server, tasks, and clients. The major features of Beego include support for enterprise applications and namespace routing. Like popular frameworks like Django, Beego also uses the MVC architecture to handle specific development aspects of an app.

Iris is also a popular GO web framework with over 20k stars on GitHub. This framework is equivalent to Express.js and ideal for people using Node.js. Some of the core features of Iris include; a built-in logger for printing and logging server requests, supports MVC architecture, a faster performance due to smart and fast compression, and also fully accordant and flexible with external libraries.

Just like Iris, Fiber is also an Express.js-equivalent framework. One of its key benefits is low memory usage and rich routing. Some of the core features of this framework include; a built-in rate limiter, versatile middleware support, and support for WebSocket bidirectional TCP connections.

Solutions with Go- What Kind of Go Web Applications You Can Build?

Golang can be used to create various types of web applications. However, these are some of the solutions that Golang is ideal for.

Go is ideal for creating cloud service applications thanks to its scalability, concurrency, and ability to deliver idiomatic APIs. These features are why Google uses Go as the primary language for its cloud computing services. Other popular cloud platforms that use Go include Docker, Dropbox, and Terraform.

Go is also ideal for applications that get very many requests simultaneously. Platforms such as Twitch and Uber get lots of requests every second, which require fast processing and handling massive amounts of data.

Golang’s scalability and concurrency make it ideal for social media apps that deal with lots of traffic every second. Social platforms that use Go as one of the core languages include; YouTube, SoundCloud, and Netflix.

Building web applications is one of the use cases of Go. It is mainly used for server-side scripting, although some developers use it to build frontend web apps frameworks.

Let’s look at some of the features that make this language ideal for web development:

In web development, concurrency helps apps take advantage of multiprocessor architecture and handle requests from multiple users simultaneously. Apps built with Go are easier to scale up because of the concurrency capabilities built within them from the ground up.

Having a library of pre-written code makes it a lot easier and much faster to write code. Golang’s library may not be as big as Python or Java, but it has most of the essential packages developers need to build functional web applications. And because it has been around for just 12 years, having such a big library is an achievement.

This feature enables Go developers to use this language to create apps deployed on the cloud. Go is also an excellent system-level programming language and has capabilities offered by languages like C.

This is one of the benefits that has forced many developers to adopt this language. It is faster to compile code with Go than with many popular programming languages, including Java and PHP. This language and its compiler were all designed while keeping the compilation speed in mind.

Pros and Cons of Golang for Web Development

Go is very smooth and will offer better performance with the same hardware as Python and Java. One of the reasons Go offers good performance is that it is statically typed, just like C and C++.

The simplicity of this programming language makes it extremely easy to learn, no matter the experience one has in web development. Its syntax is even easier to adopt if the developer has prior experience with Java and C. The language also has a large community, making it easier for developers to get solutions from Go-centered forums.

So, in case one gets challenges along the way, they can easily find solutions on platforms including Reddit, Stackoverflow, Quora, YouTube, and many more. Golang’s documentation is also well-articulated and easy to understand. So, it is of great importance if you happen to get stuck along the way.

Go will divide large programs into smaller tasks and run them simultaneously through goroutines and channels. With this, computers will execute these tasks much faster and spend less idle time. This feature also makes Go the ideal language for building scalable apps whose user base grows exponentially over time.

Despite having several Go frameworks, it is possible to build web applications with Go without relying on any framework. Go has an excellent standard library, making it possible to create apps right within without using a framework like most programming languages. So, if you are not a fan of frameworks, Go’s standard library is good enough to get you going.

Go is supported by Google, a company that we expect to be here for many more years to come. That simply means Go will still have Google’s backing, which is fundamental for its growth.

Despite having a lot of benefits over most programming languages for web development, Go also has some drawbacks that we need to talk about.

Being simple is at the core of Golang, but sometimes being too simplistic comes at a cost. The simplicity of this language comes at the expense of limited versatility, offered by languages such as Swift or Haskell. These languages are much harder to learn, but they pack in many features that enable developers to do complex tasks much faster.

One of the disadvantages of being a new language is the relatively smaller community support compared to languages that have been around for over 2 or 3 decades. Being new also affects the number of packages available in the language’s libraries. Go might be having a smart standard library, but it is nowhere near what the likes of Java and Python offer.

Another major drawback with Go is the fact that it has no Graphical User Interface library. This means you will have to connect a library to your app instead of doing it natively with languages such as Java and Python.

Go has gained popularity thanks to the many benefits it has over Python, Java, and PHP.

Its simplicity, scalability, maintainability, and concurrency features are some of the reasons over 1.1 million developers chose this language over several other available options.
You can reach out to us to hire software developers for your next Golang web development project, and our team will help you find the expert developers who would also be a culture fit. 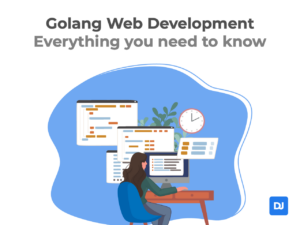