Golang vs. NodeJS: Which One Wins the Battle for Backend Development? - DistantJob - Remote Recruitment Agency

Golang vs. NodeJS: Which One Wins the Battle for Backend Development?

NodeJS has long had the upper hand in the ongoing rivalry with Golang and other programming languages. Golang, on the other hand, has emerging features and a faster-growing community.

Our comparison of Golang vs. Node JS can not only help you choose the best programming language for your project but also give you critical insights about hiring developers in these languages.

A server-side runtime environment based on the V8 JavaScript transformer in Google Chrome is known as NodeJS. Since its debut in 2009, NodeJS has become the most popular cross-platform development environment.

What is NodeJS used for? It is to build a highly scalable server-side platform using JavaScript. This language stresses an event-driven, non-blocking I/O design. To use NodeJS, you’ll need to know JavaScript. As a result, developers now have an easier time communicating scripts on both the client and server sides using a single language.

Pros and Cons of using NodeJS

Golang (or just Go) is a multipurpose programming language developed by Google in 2007 and available under the GPL. It combines the speed and security of C/C++ with Python’s flexibility.

As a result of its outstanding garbage collection management, memory safety, and enticing user interfaces, Go is a popular language for managing concurrent programming.

Pros and Cons of using Golang

Once we’ve covered the fundamentals of both languages, it’s time to compare Go vs. NodeJS and weigh the benefits and drawbacks of each. This way, you can decide which language is ideal for your project and which developers to hire based on your needs.

According to the comparison of Go’s performance vs. Node JS, Go is superior and can help developers get more consistent results. When comparing the real-world performance of Go vs. NodeJS, both languages might provide pretty similar results. If you need a database connection or a network connection, Golang and Node JS both provide these at around the same speed.

Because they were dissatisfied with present programming languages, Google was eager about putting forward Go. Based on C and C++, it is a lightning-fast and agile operating system. Golang is a better alternative for raw computation and performance when compared to Node JS.

Compared to other programming languages, Node JS is more powerful since it comes from JavaScript. Node JS is unable to provide smooth CPU or memory-bound job execution due to its flaws. Node JS may operate well or poorly depending on the quality of your project, to put it another way.

When comparing Go’s performance to that of Node JS’, Go comes out on top. This gives developers the ability to achieve more outstanding performance.

When comparing the real-life performance of Go with NodeJS, the results are almost identical for both languages. Golang and NodeJS, for example, are equally fast and efficient when connecting to a database or using a network interface.

When it comes to error handling, Golang and NodeJS are both excellent choices.

Go’s approach to error handling necessitates the use of error checking implementations. Developers face challenges because compile-time and runtime faults are handled in different ways. Golang’s creators, on the other hand, are already hard at work on the new error handling capabilities that will help cut down on overall development time.

NodeJS, on the other hand, utilizes the well-known error management method known as throw-catch. This is the usual method of detecting mistakes and fixing them before moving on to the next step.

When comparing Golang and Node’s error handling mechanisms, many web developers find that NodeJS is superior because of its throw-catch technique.

5. The Learning Curve for Golang vs. Node.JS

There are unique ideas, methods, rules, interfaces, and pointers in Go. It is a complete and contemporary language. Since several materials are accessible online, it requires an extensive study on the developers’ part to understand it.

When it comes to programming languages, JavaScript is the most popular. As a result, even if someone knows the basics of JavaScript, they can easily discern NodeJS.

Many online and offline resources are available to help newcomers learn JavaScript, and there is also a large JS society where experts exchange knowledge and provide assistance. In terms of training curve estimation, NodeJS beats Go.

6. Concurrency of Golang vs. Node JS

Go’s Concurrency is a strong point since it is well-suited to large software projects that handle thousands of requests at once. The lightweight thread connection mechanism in Go enables developers to perform their programs in parallel. Go employs routines (called Goroutines).

While Go allows users to manage many functions at once, this is not possible with NodeJS.

The event-callback tool is used by NodeJS, which is single-threaded. As a result, everything must be completed in the correct sequence, and no two tasks may be completed simultaneously.

As a result, Go wins this Go vs. NodeJS Concurrency comparison!

7. Scalability of Go vs. Node JS

When it comes to Go vs. Node scalability, Goroutines are a significant feature for the language, allowing it to keep track of communication threads entirely and presumably. Node JS, on the other hand, has a restricted potential to scale. The lack of parallel processing makes it unsuitable for big tasks.

The most widely used programming language nowadays is JavaScript. Aside from extensions like CoffeeScript, Flow, and TypeScript, JS remains the most sought-after language in many fields despite its shortcomings.

Adding interactive components to online applications and browsers is one of its most well-known uses. JS is the technology of choice for the majority of front-end developers.

The Node.js runtime, on the other hand, offers a wide range of capabilities not limited to front-end web development.

According to a Stackoverflow poll, JavaScript is the most widely used programming language. According to the same survey, 66% of respondents like working with JS.

Only 17.8% of those who took the survey said they were interested in learning more about JS.

In addition,  Octoverse has rated JavaScript as the most popular programming language of all time for multiple years in a row.

JavaScript has slipped in the TIOBE rankings from last year. A growing number of complaints about certain flaws is often cited as the catalyst for this change. But despite this, it’s never dropped below the top 10.

JavaScript is by far the most widely used programming language, as shown by the Hired ranking system. However, in terms of popularity, it ranks just 7th.

Why? The main reason for this is because there are so many experts all around the globe. JS developers are now easier to come by than those who work with Go or Kotlin.

There are still many people who have never heard of Go even though it was created back by Google in 2007 for APIs and online applications.

However, it has gained popularity in recent years in the developer community. In fact, several programmers now think it’s better than Python.

The TIOBE index is a measure of programming language popularity. Some competent engineers in relation to language, courses & search queries determine the rating. During the first few months of the 2020 Go rating, Go Lang rose 8 spots up the ranking list according to this index.

However, the Stackoverflow study revealed that Go is just the 13th most popular programming language among all developers.

Stackoverflow’s study also found that 67% of respondents like writing code in Go Lang, and another 16% want to try it out (third place after Python and JavaScript).

Despite its rising popularity, many developers do not want to use Golang. The reasons range from technical things like lack of generics, convoluted module systems to concerns about its maintainability and how it disregards years of programming research and is still stuck in the 70s! In fact, in niche communities like Hacker News or Reddit, there are threads (like this one or this ) that talk, rather strongly, about the shortcomings of Go! The shortcomings are also reflected in a few studies such as the one by Octoverse in 2019. According to it, Go stood as the tenth most popular language in the world.

Nevertheless, the simplicity of Go is what first draws attention to it. In a few days, a programmer can build very efficient code. A Garbage Collector is also built into Go. As a result, memory management is no longer a concern for the developer. Go programmers often spend 20% of their time developing code and 80% supporting it.

All of these realities have acted as a catalyst for an increase in the need for qualified professionals. Google has also announced the development of Go 2, which is expected to be even more stable than the original. As a result, Go could go on to become more popular by the end of 2021.

Which Companies Use Go vs. NodeJS?

As technology advances at a breakneck pace, enterprises are using the newest tools and techniques to increase the speed and quality of their software development processes. Following the NodeJS vs. Go comparison, which language has been picked by the top companies for backend improvement?

Many companies have switched from their present technologies, such as NodeJS, to Go since Go’s latest release to improve the performance of their product. This was when the conflict between NodeJS and Go began.

It could be challenging to determine which technology is superior. You need to take a call based on the specific project requirements, overall objectives of your company, and the current skills you have within the team.

This will make it easier for you to make the hiring decisions and find people who have the required skill set.

You can also read a similar comparison between Angular and React if you are confused between them and want to hire developers in those areas.

Looking for Golang Developers? Check out how DistantJob can help you find talented remote GO developers at a fraction of the usual cost. 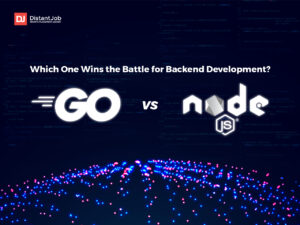