Over the years, AngularJS has become a staple of web development, whether  for web apps or pages. A big community has grown alongside it, providing a lot of code snippets and other equally useful tools to help other developers with common problems.

Let’s take a look at some of the best AngularJS development tools!

A good tool to code in is essential when developing a project. It can help developers write and debug code more efficiently. Let’s take a look at some of the most popular AngularJS development tools.

JetBrains has a long history of developing robust IDEs, with many features that help developers in all stages of development. WebStorm is no different, providing JavaScript developers with one of the smartest code completion and analysis tools out there. If that alone isn’t enough to convince you, it has several other enticing features, such as remote collaboration, database tools, and embedded unit testing. If you want a certain feature that you cannot find in the vanilla package, there’s always the plugin marketplace to extend its core functionality.

Aptana Studio was built from the ground up to be a web development IDE, and it shows. It features lots of tools to help build web apps and pages, but by far the most useful are its code assistant, which tells developers at a glance which browsers support a certain element, and a deployment wizard to quickly get the latest version of your project up and running in a live environment.

Angular IDE is an extension for the MyEclipse Java IDE that allows developers to develop Angular projects natively. It features wizards to ease the creation and set up of projects, but also of components, services and modules, which speeds up development significantly. It also has a handy feature in the form of CodeLive, a tool to inspect which elements and Angular Components are being loaded on the web page.

Sublime Text has long been considered a very lightweight and stable code editor and has become even more so with its recent 4th version. With this version, several useful features for Angular developers were introduced or improved, namely GPU rendering, context-aware autocomplete and Support for Javascript shipped by default. It also provides a Python API that allows for the development of extensions, and its  extension ecosystem has a vibrant community.

Visual Studio Code is Microsoft’s most recent and free IDE. Streamlined but still powerful, it provides a solid working environment for programming in most languages and has several extensions that help set  up other tools and modules for a given language or development environment. Angular is no exception, and Visual Studio Code features dozens of extensions specifically for Angular, including AngularJS tools, UI elements, and other snippets.

Unlike other IDEs on this list, JSFiddle stands out by being a solid online solution to develop and debug, providing separate windows for HTML, CSS, JavaScript, and Angular all in one place for easy editing. Plus, it also allows for real-time collaboration. It is extremely useful to develop small code snippets or to test out new ideas.

When building a project, it’s important to have a strong foundation that makes expansion easier. Frameworks provide a good starting point to create and evolve your Angular projects.

A framework geared toward developing Single Page Applications (SPA), Angular Kickstart uses a combination of AngularJS, Gulpjs, and Bower to help you develop your page. It also has a modular structure out of the box that helps your code stay reusable and comes with a special task to run your unit tests.

Built to develop web apps, Angular Seed is an application skeleton for developers to build upon. It provides a robust project structure, including a configuration to run both unit tests and end-to-end tests.

If you want to use Django in conjunction with AngularJS, you’ll want to give Djangular a look. It features a lot of quality of life features that help the integration and communication between AngularJS and Django, using a similar project structure to Angular Seed.

If you have a Firebase app and you want to use AngularJS alongside it, Angular Fire simplifies that process by providing developers with many features that ease the transition between the two technologies, including the dynamic importing of Firebase to reduce the loading time of your app.

While not a framework in the purest sense, the MEAN tech stack is a commonly used set of technologies that work well together to build all sorts of web projects, including AngularJS. It relies solely on JavaScript as a programming language, which helps developers by providing code reusability between layers of the project.

Libraries and components are core Angular developer tools. They provide easy to use features that are invaluable to developers to save on development time.

angular-gettext is an indispensable tool if you’re developing an international AngularJS app. It allows developers to annotate their text with attributes, and the library works behind the scenes to provide translations depending on parameters such as a number of elements (singular and plurals).

If you want a lightweight solution to implement grids in our project, Angular Deckgrid is here to help. By using a template and some CSS, developers can quickly build a custom grid that fits your project’s needs, including responsive grids.

Videogular is the answer to all those web apps or pages that need video playing. It provides many helpful functions such as moving to specific time points within the video or even changing the video within the player.

AngularUI provides a list of varied AngularJS modules to add different components and functionality to an app or page, such as calendars, maps, and sliders. Using these modules provides standard compliant elements and can speed up development considerably.

Ngx-restangular helps an app or page’s client-side communication by providing a way to get data through a RESTful API. With this library in your project, you can alias your URLs for ease of use and decrease your project’s memory footprint by reusing the same object for several requests.

Testing is an important step of development and should be performed regularly. Catching bugs early makes your app look all the more professional to your end-users. Let’s look at some Angular dev tools to help with this.

Jasmine is a test framework that is easy to write tests in while being highly customizable. One of its advantages is that it is standalone and can function by itself out of the box, and does not require a DOM to work. It can be configured to run with Node.js or in a browser.

Mocha is a test framework running on Node.js that runs tests serially and makes accurate reports with the time the tests took. It has several quality of life features for developers, such as string diff, test retry, highlight slow tests (with configurable thresholds) and global variable leak detection.

Protractor is a test framework for AngularJS applications that simulates real user interaction in a real browser. It has a handy feature of running the steps in the tests automatically after the page finishes its pending tasks, easing the work of the developer by not needing to code in waits and sleeps that can potentially bloat the tests’ code and induce errors.

Karma is a testing environment that can run tests in multiple real browsers simultaneously, and do so at regular intervals during development, including on every save. It includes plugins to interface with testing frameworks such as Jasmine and Mocha.

NG-inspector is a particularly useful AngularJS dev tool in the form of a browser extension that helps with the development and debugging of AngularJS applications. By being a browser extension, it provides developers with powerful tools that allow them to see the rendered app while also inspecting the DOM nodes in real-time.

Which IDE is best for AngularJS?

That will heavily depend on the use case for your project. We’ve given you ample choices above, but if we had to choose:

What are the tools used for AngularJS?

AngularJS, as we’ve seen, has plenty of external tools available created by the community. However Angular also provides an official tool in the form of Angular Commando Line Interface (CLI), which gives access to several mini tools:

What is an AngularJS developer?

An AngularJS developer is a web developer that knows about or specializes in Angular as a web application/page platform.

What is the build tool for Angular?

To build Angular Projects you’ll need the Angular CLI, which gives you access to its build tool in the form of ng build.

Using AngularJS is a good choice for your projects in part because of the wide community available and the tools it has developed over time. We hope you’ve found an AngularJS dev tool that fits your project or one that you didn’t know about and are eager to try out!

Looking for Angular expert developers at affordable prices? Distantjob works with many talented and professional developers and can easily find someone to fill a position in your company at attractive rates while also being a great culture fit. Get in contact with us! 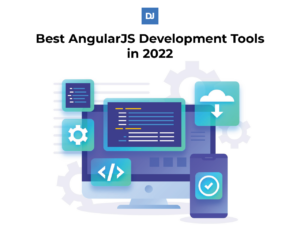