Synchronous vs. Asynchronous Programming: What You Need to Know - DistantJob - Remote Recruitment Agency

Synchronous vs. Asynchronous Programming: What You Need to Know

With the advent of more powerful processing, programming has split into two camps: synchronous and asynchronous. Each has its own use cases and pitfalls, and it’s important to know their differences so you can correctly choose the right type of communication in your projects.

Let’s demystify the whole concept of synchronous vs asynchronous programming.

What Does Synchronous Mean In Programming?

Synchronicity in programming happens when the execution of operations is done sequentially. An operation will only be executed after the previous one is done.

This means that a potentially complex task may take a while before all its steps are executed and completed. In technical terms, synchronous calls are done in a single thread, and every operation being executed blocks that thread for the execution’s duration.

As a real-life metaphor, consider the preparation of a meal. When a person is alone preparing a meal, they will have to do all the tasks by themselves. And some steps require food processed in previous steps. You can rearrange the order slightly, but some steps have a fixed order. You can only mince a carrot after you’ve unpeeled it, for example.

What Does Asynchronous Mean?

Continuing our metaphor of preparing a meal, adding another cook to the kitchen allows for more time efficiency. While one person is taking care of chopping vegetables, another can start making the sauce. By adding yet another cook, they can prepare the meat while the other two are working. And so on. There are still some steps that need to happen in sequence (the assembly of the dish after every ingredient is prepared is an obvious one), but others can be carried out independently to speed up the process.

What Is The Difference Between Synchronous And Asynchronous?

The main difference when talking about operation synchronicity is in their thread usage. Synchronous processing uses only one thread where it executes all operations in succession. In contrast, each asynchronous operation is done in a different thread that reports back to the main thread with the result when complete or with an error in case of failure, leaving that thread open to process other requests.

What Is Synchronous And Asynchronous With Example

For the sake of simplicity, let’s imagine we want to sum two numbers and then display the result in a webpage’s HTML element.

In a synchronous project, this is how we could do it:

Fairly straightforward. We perform the operation, have the value returned to us, and then do what we want with it (in this case, display it).

Asynchronicity in JavaScript can be accomplished through the use of callback functions. Consider our example now done asynchronously:

Notice the difference? We’re not explicitly displaying the value after performOperation. This is because performOperation is now responsible for calling a callback (in this case, changeValueDisplay) after the operation is complete to display the calculated value. You can easily imagine a more complex operation in place of our sum would severely slow down the page loading were this a synchronous operation. Now the programmer is no longer concerned with how long the operation takes, but the callback guarantees that after it’s done, however long it takes, the display will be changed.

Is Asynchronous Better Than Synchronous?

The answer depends. When considering async vs sync processing, you have to take into account the type of project you’re developing. Some types of processing are naturally more suited to certain types of projects. Let’s look at some advantages and disadvantages of each and see which is better in what situations.

Synchronous vs Asynchronous: Advantages and Disadvantages

Synchronous has one main advantage:

But has one disadvantage as well:

While Asynchronous has some key advantages:

But also comes with some disadvantages:

Synchronous vs Asynchronous: Use Cases

You’ll want synchronous programming when your project focuses on a single task (especially if it’s computationally heavy), or tasks that are highly dependent and cannot run in parallel:

You’ll want asynchronous programming when you have a lot of tasks that do not depend on each other, or tasks that take a long time and can be run in the background:

As a final note, if your project is relatively simple, using asynchronous programming is highly overkill and is generally not advised. Asynchronicity’s speed benefits would be countered by the inherent increase in complexity for your project.

Asynchronous programming can become a great boon to a complex project, as well as a headache if it’s not handled properly. We hope this article was enlightening when it comes to the differences between synchronous and asynchronous programming, and where best to apply each of them. If you’re looking for developers for your project, be it synchronous or asynchronous, DistantJob has a large number of expert developers for hire. We have a strict and rigorous process that helps our clients find the best candidates that fit any company’s needs and culture fit, so don’t hesitate to contact us! 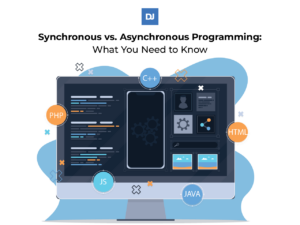