If your next project involves an iOS app, you must find the best language for iOS app development. There are multiple iOS programming languages and each language has its best pros and cons that you must know before making the choice. Keep reading this article to find out which iOS language is right for your project!

If you have some doubt about the potential of an iOS app, consider this: In 2021, over 4.2 billion unique mobile devices were used to access the internet. This indicates that over 90% of internet traffic in 2021 was from mobile devices. And according to numbers provided by Apple, more than one billion of these devices are run by iOS.

Apple’s App store is the second most popular store with over 2.2 million apps. This shows clearly the potential that developers see in the Apple ecosystem.

Apps available in the various stores

In this article, you will find the top 5 programming languages for iOS development. You can find their best use cases along with the pros and cons of each language. But before we go into the list, let’s look at what you need to consider before building an iOS app.

What To Consider Before Building An Ios App?

Before you build your iOS app, it is essential to have details of the people you target to use the app. Having details of the target audience and how they usually use their devices will give you an idea of how to design the app and which features matter most to these people.

Knowing your target audience will also make it easier for you to run ad campaigns for the app because you know exactly who you are communicating to. So, start by doing market research to determine your target users based on gender, age, location, and any other relevant criteria.

2. Know The Problem You Are Solving

While planning to build your iOS application, you need to have a clear idea of the problem you are trying to solve. This should always be the first step because if your app is not solving any problem in the market, it will not be used by anyone. This will also help you determine if you have competitors.

3. The Scope Of Your Application

After defining the purpose of the app, you now need to determine the different capabilities your application will have. For instance, if you are building a fitness application, you need to determine the exercises to include in the app. You can always expand the scope of the app in the future,  but initially, it’s best to set a strong foundation in terms of what you’ll cover at the start.

4. What Devices To Support

5. Evaluate Your Capacity To Build The App

Building an application is no easy task and will require several people with different development skills. So, before you start writing your first line of code, it is crucial to evaluate if you have the necessary talent to build the kind of app you want.

Some of the specialists you may need on the team include; Frontend and backend Developers, UX Designer, UI Designer, Graphic Designer, and even QA developers and Project Manager.

For startups, you can have one developer play two or three of the above roles. However, eventually, you may consider hiring remote developers who can help you scale your application.

Our expert team at DistantJob can help you hire an iOS app developer that is not only experienced but also fit your culture, thanks to our comprehensive recruitment process.

Now that you know the factors to consider before starting, let’s get into our list of the best programming languages for iOS development.

Apple created Swift with the aim of making it easier and quicker for developers to build apps in the Apple ecosystem. Some of the frameworks that work with Swift include; Cocoa, Cocoa Touch, CloudKit, AVFoundation, and many more.

The best use case for Swift programming language

It is best to use Swift when you want to build iOS apps quickly and with the flexibility of scaling them up in the future. Swift has a relatively shallow learning curve, so it is pretty easy for developers to get started using this language. Apple also regularly updates Swift to make a much faster, more reliable, and secure programming language for building iOS apps.

Pros and cons of Swift

The best use case for C#

It is best to use C# if you plan to build iOS and Android applications. It would also be ideal to use this language if you already have C# developers on your team.

Pros and cons of C#

Objective C is an extension of the C programming language with object-oriented programming capabilities. This language was developed in the early 1980s. It is the language that was used to create OS X and iOS plus their APIs. So, it can also be used to build iOS applications.

According to Tiobe, Objective C is the 20th most popular programming language used by over 4.1% of developers worldwide. Just like C#, Objective C is also cross-platform, so it can be used to create apps for multiple operating systems, including macOS and iOS.

The best use case for Objective C

Objective C is an old and probably outdated programming language (It was last updated in 2016). You should only consider using it if you are building apps for older iOS devices that are not supported by Swift. But if you want to build apps for next-generation iOS devices, using Objective C is not a good idea.

Pros and Cons of Objective C

Since it is a general-purpose programming language, it can be used to build iOS and Android applications. One of Java’s essential aspects is that its code doesn’t need recompilation to run on any platform, making it an incredibly reliable and fast cross-platform programming language.

Best use cases for Java

Java is not a very popular language for iOS. It is only ideal to use it you already have an Android application that you would like to build for iOS. But if you are strictly building an iOS app, it is best to opt for Swift instead.

Pros and Cons of Java

Hypertext Markup Language 5, commonly known as HTML 5, is a front-end programming language used to create web app UIs by defining their content’s meaning and structure. It is used together with CSS and JavaScript to create interactive UIs for iOS mobile apps.

HTML is one of the easiest languages anyone can learn, making it an ideal option for people just getting started with coding.

Best use cases for HTML 5

HTML 5 is ideal if you intend to build UIs for iOS apps that are to be used both online and offline. You also need to ensure you have developers on your team that are well conversant with HTML 5, CSS, and JavaScript because these three work together.

Pros and Cons of HTML 5

The above are the five popular languages you can choose from if you want to build your next iOS application. We have discussed the best use cases plus the pros and cons for each, so it should be much easier to make the choice now.

Swift should be the most obvious choice if you want to create the best well-optimized iOS apps. Objective C should be a no-go if your goal is to build apps for next-gen iOS devices; it is outdated and lacks features for creating secure and feature-rich modern iPhone apps

However, for those considering building apps for iOS and Android, you may have to opt for C# or Java since they are cross-platform languages. 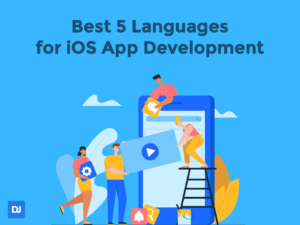 The Agile Software Development Life Cycle: All You Need to Know

For software teams, delivering a product goes beyond simple planning. They need to evaluate resources, time frames, and the steps to achieve the desired goal. […]

Building an online store can be easy thanks to platforms such as Magento. The costs of licensing these platforms can be very advantageous when you […]

What is Low Code Development?

If you work or have any interest in software development, you’ll eventually come across a relatively new term: low code. What is low code? […]