What is Angular Material?

Angular Material is a library developed by Google that implements its design and user experience philosophies and methodologies in web apps developed in Angular.

It provides many features to create a consistent, modern, sleek design that follows strong principles.

Let’s dive into this library to see what it can do for your Angular applications.

In order to talk about Angular Material, we should talk about Material itself.

Material was initially introduced in 2014 by Google. Its initial and main goal was to create a shared and united visual language applicable to all of Google’s products and web applications.

This language would, in turn, promote good design principles that would improve the user experience. To achieve this, the team behind Material decided to translate physical properties of objects (such as surfaces, edges, seams, and shadows) to digital equivalents that could guide the user towards experiencing digital content in an intuitive way. The whole design language was inspired by paper and ink specifically.

Material has evolved over the years, as apps and products have become increasingly multi-faceted and complex. It brought to the forefront tools that would empower designers to theme their applications, providing a certain experience or matching a certain brand’s visual language while still maintaining the strong principles it started out with.

Material Design’s principles go over the many aspects of an application’s components:

These guidelines go into detail over the Dos and Don’ts of the many aspects of each category to clearly communicate the identity that this language establishes.

What is Angular material used for?

Angular Material is a library that puts Material Design into practice and provides Angular developers with tools to apply Material’s design language to an Angular app’s UI.

Angular Material features many commonly used components in web applications. They are compatible with the most popular browsers and allow for responsive design to ease the development of applications that can fit the many platforms Angular already targets, from desktop to mobile and web.

These components also include the built-in animations, interaction feedback, and accessibility options set by the specifications of Material. Their underlying elements are highly customizable in terms of form and placement and can be further themed to fit a brand’s design.

Examples of these components include:

But if these components alone aren’t enough on their own, Angular Material provides tools to create custom components.

The Component Dev Kit (CDK) is Angular Material’s way to provide developers the ability to tailor the library’s core components and parts in order to create custom elements and solutions.

It is built upon a set of behaviour primitives that can be combined to make more complex UI components. These include:

When Angular Material’s built-in components don’t answer all your application’s needs, the CDK will help you make the component you wish to implement with greater ease.

Whether you’re looking for an extensive and tested library of UI components or a way to implement Google’s Material design language for your web application, Angular Material will cover most if not all of your needs out of the box. For anything else, Angular Material provides core functionality that will help you realize your vision for your application’s visuals.

If you’re looking for developers to help you build your web application’s UI and UX using Angular Material, DistantJob can provide you with the best people tailored for the job. 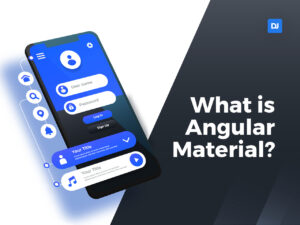