Why and When to Use ReactJS? - DistantJob - Remote Recruitment Agency

Why and When to Use ReactJS?

As the internet evolves, new frameworks and libraries have been developed to help teams build those experiences. React is one such library that has been widely adopted by developers at large, including some big companies.

The questions inevitably come up: “Why use React?” and “Should I use React in my projects?”. We’ll go over the main advantages it brings so you can make that decision.

ReactJS, as the name implies, is a JavaScript library for building interactive User Interfaces using components, allowing them to change a page as needed and without reloading it.

It was initially developed for Facebook to help the development team build a more responsive newsfeed. From there, Instagram used it and later, when it was open-sourced, developers began using it on their own projects across the web.

Nowadays, React boasts close to 11 million websites that use it to power their websites and services.

Why Use React? The Top 5 Reasons

React has become one of the go-to JavaScript UI libraries, and it’s easy to see why. By providing a powerful library with reusable components and efficient ways to update a page’s contents, it empowers developers with the tools needed to make highly interactive, consistent, and responsive UIs.

Being a library and not a framework, React can easily be integrated into JavaScript projects with different tech stacks as a UI builder or even as an auxiliary library to help with certain UI tasks.

Let’s go over the main advantages of using ReactJS for web development and see why it garnered such mass adoption from web developers over the years.

1. React can be easily integrated and is highly reusable

Being a library, React was built to feature highly reusable components and can be applied to various types of projects. These can be further composited to create more complex behaviors that can be turned into components for greater code reusability. This makes React extremely flexible and prevents a lot of duplicate code.

You can use React’s pre-built components, create your own, or even use components from well-established libraries, such as:

Besides that, you can find many components authored and shared by React’s community. Absolutely Awesome React Components & Libraries lists several of the more unknown, but still very useful, React components that you can use in your own projects.

2. React feels like a natural extension of HTML and JavaScript

React makes use of what it calls JavaScript Syntax Extension or JSX. This extension allows developers to author components and renders using HTML-like language inside JavaScript code.

Take for example, this code:

This is code that can be authored in React, but it’s not a string, proper JavaScript, or HTML. However, it is close enough to HTML that it can be authored as such. React takes this code and then compiles it using Babel to turn it into actual JavaScript.

The previously shown code will compile into something like:

By doing this, authoring in React becomes almost like second nature to knowing HTML and JavaScript. Developers already familiar with both will find React to be extremely welcoming and easy to learn.

3. React is built for Efficiency

Changes in a web page or app are usually done through changes in the DOM of the HTML. However, these changes are slow and costly processes.

To counteract this, React employs what it calls a Virtual DOM.

All changes performed to the DOM are kept in this Virtual representation of the actual DOM. React then reconciles the differences between the Virtual DOM and the actual DOM by performing the minimal amount of changes possible.

This makes React far more efficient than previous solutions where small changes in the code would trigger large chunks of the DOM to update to reflect those changes in the UI.

4. React can be a springboard to develop native applications

React Native isn’t exactly a 1-to-1 transition of React to native platforms. Native forgoes the use of HTML and CSS, but its components still use the same API structure as React’s components.

So, for example, you can have a component in React that goes like this:

In React Native, to do the same, you’ll code something like:

React Native can be used to build Android and iOS apps. Microsoft also maintains the React Native Windows and React Native macOS extensions to allow you to port your reactive Native projects to Windows PCs, Surface Tablets, Xbox, and macOS.

5. React has a massive community and is used extensively by companies

React was initially created by software engineers at Facebook, and to this day, they are its biggest contributors and supporters. React is heavily used in Facebook and Instagram, two of Meta’s biggest apps, so it’s in their interest to keep it modernized and efficient.

The React team frequently updates not only the library itself but also develops tools to work with it. An example of this is codemod, which refactors and updates React code to keep it up to date with its latest APIs.

Also, since it became open-source, React has been adopted by many developers as their go-to web UI library. Consequently, many components, component libraries, and tools have been developed over time to help out other community members with their own React projects. This makes it easier to find solutions and components to solve common problems during development.

If all this wasn’t enough, several companies adopted React for their web presence. Besides the obvious Facebook and Instagram, others such as Uber, Airbnb, Shopify, Netflix, Pinterest, Amazon and Udemy also use React.

All these factors have helped React establish itself in the web space for developing pages and apps.

When to Use React for Web Development?

React has some clear advantages that can be leveraged to make some web pages and apps. But what is React good for? What are the projects where it shines?

By far the biggest target of React ever since it began development, Single-Page Applications are a huge staple of the current internet era. Users want the pages they visit to be seamless and fast. React was built to cater to these needs while keeping a page updated and responsive to user input.

React is best used on pages that require a lot of information to be updated fairly regularly or even in real-time. React makes these changes with far greater efficiency than other options due to its reconciliation technology.

Examples of these types of applications and pages include:

These are demanding apps where users want to stay on top of the most up to date information at all times.

Websites that feature user-to-user interaction can also leverage the power of React to create a dynamic environment. Places like blogs, forums, online galleries, and even video-sharing platforms can leverage React’s power to create highly interactive experiences.

Other types of websites that benefit from this dynamism are wikis. By making them easier and faster to navigate, they help their users find the information they need quickly.

Whether grids with item listings or buy buttons, e-commerce platforms are known for their multiple components and use. React can easily implement these components and prevent the developers from repeating code, speeding up the platform’s development while also keeping it more maintainable in the long run.

Since it’s also platform and tech stack agnostic, it’s easy to integrate it into existing projects if you need to expand on an existing product.

If you leverage the vast community it has, you can easily find solutions to common problems, be it a component that already does what you need or some help to make your own custom components. This can speed up the development process of your page or app.

If you’re looking to hire React developers for your company or to help with your projects, DistantJob can help find you the best candidates that fit your company and projects’ needs. 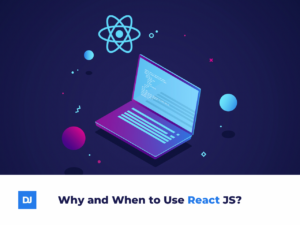