Is Xamarin app development the right choice for your business?

Nowadays, mobile app development can quickly become a daunting task. With the existing number of platforms, it can take many teams or a lot of time to deploy an app concurrently in all of them.

That’s where Xamarin comes in. Its goal is to unify the development of mobile apps with one code base to speed up the development process while maintaining as many of the native features of each platform as possible.

Xamarin can be the right option for teams that need to turn over a mobile app for many platforms in a short amount of time.

Let’s analyse the pros and cons of Xamarin app development

Xamarin has set a lofty goal of empowering mobile app development teams with a flexible framework that can help them quickly prototype and iterate an app until it’s market-ready.

Here are the most important Xamarin app development benefits.

1. All Your Mobile App Development In One Tech Stack

No matter if you’re targeting Android, iOS, or other popular mobile platforms (including TV and wearables), Xamarin apps are always developed in C#. Using C# allows developers to leverage the power of the .NET framework, which handles a lot of common tasks such as memory allocation, garbage collection and interoperability with underlying platforms. Also, .NET has an extensive ecosystem of libraries and packages that can be used to speed up development.

One app with several build targets will share the majority of its code, the big exception being the UI code to handle each platform’s native design and user experience. Updates developed for the app that do not delve into either of these categories can be easily pushed to several platforms by only changing the code once.

Another added benefit of Xamarin’s single tech stack is that the tools provided for coding the majority of the app and to design the UI are all embedded into Visual Studio itself and do not require extra tooling.

2. Native UI And Experience With Close To Native Performance

Besides the native appearance, apps built with Xamarin are compiled to take advantage of each platform’s specific hardware to make it as close to natively performant as possible.

If you want to further unify your codebase, Xamarin.Forms can be used instead of the native libraries to implement your app’s UI. In this case, you implement the UI once and then it gets converted automatically and deployed to the target platforms. This can speed up the prototyping and even the development of the app significantly.

Xamarin.Forms also provide other productivity-boosting tools such as XAML Hot Reload, allowing developers to easily patch in UI changes while testing the app without restarting it.

However, this flexibility comes at a price. Xamarin.Forms adds a layer to apps that can affect their performance when compared to those using Xamarin’s native libraries (Xamarin.Android and Xamarin.iOS). The differences are very slight in most cases. And won’t be noticeable unless the UI requires a lot of heavy tasks in order to function, such as image manipulation or database queries with a big number of records. Developers should take care when using Xamarin.Forms in case speed and performance are critical issues.

Being a technology backed by Microsoft, Xamarin has very comprehensive documentation, courses, and tutorials to help out developers.

1. The Cost of Xamarin

By far the biggest drawback of Xamarin can be its price. Xamarin itself is Free and Open-Source, but that changes when you want to use it in an enterprise setting.

Although you can use any IDE to develop with Xamarin, in order to take full advantage of Xamarin’s features, you’ll probably want to use Visual Studio.

Let’s go over Visual Studio’s Subscription costs and the features those subscriptions can offer you in a Xamarin development environment.

Visual Studio Community is the free version of Visual Studio. It features many of the essential tools needed to develop Xamarin apps, including access to:

However, there are limitations to the use of this version of the program.

First, if you’re using Visual Studio Community as an individual, you are free to use its available features to create free or paid apps without restriction.

Second, if you’re an enterprise organization (meaning you have >250 PCs or >$1 Million US Dollars in annual revenue), you cannot use Visual Studio Community.

Finally, if you’re a non-enterprise organization, up to 5 people in your organization can use Visual Studio Community.

However, there is an exception. Any organization can use Visual Studio Community if they’re using it in classroom learning environments, academic research or contributing to open source projects.

This is the cheapest paid subscription you can get for Visual Studio. It supports all the features present in Visual Studio Community, but is no longer restricted to rules of use.

And it provides more complete information of the code base in the form of a more robust CodeLens feature but, other than that, it’s pretty much the same product.

Visual Studio Professional can be subscribed to for $45/month per seat, and each seat gets access to an Azure DevOps account, enabling you and your team to use the cloud to share code, track work, and ship software.

In short, Visual Studio Enterprise builds upon the features offered by the Professional version, and adds all the other features Visual Studio can provide in a single package.

For general coding tools, the Enterprise edition offers, among others:

Also, when it comes to Xamarin development, Enterprise offers some enticing features, such as:

If you want these useful features for your Xamarin app development, you’ll have to pay $250/month per seat. And each seat gets access to an Azure DevOps account.

Conclusion: It can get pricy

In an enterprise environment, you can get by with the Professional edition. But if you want the full features to develop in Xamarin, there’s no other option but to purchase the Enterprise edition.

Either way, the money you will need to spend in licenses will quickly mount up depending on the number of seats the team needs. Be careful and make sure your budget can account for these costs.

2. You Won’t Always Be On The Bleeding Edge

Multi-platform solutions like Xamarin are very reliable and spare a lot of work by making the code reusable. But adding new features from any given platform onto the framework usually takes time from the moment they are introduced.

This is not necessarily a deal-breaker. But if you want to use the latest tech of some specific platform, make sure Xamarin has already got a solution in place for what the project needs before committing to it.

Although Xamarin was built to compile natively to platforms, it won’t be an exact 1-to-1 match. The number of libraries and processes it uses to create and replicate native code will always introduce overhead.

Xamarin has some performance dips compared to strictly native code, especially on some platforms. Do note, however, that these changes won’t necessarily be noticeable to most users.

Being reliant on .NET and its libraries also increases the app’s size, though this can be alleviated somewhat with a few optimizations.

Xamarin Is Going Through A Big Reform Soon

This one isn’t necessarily an advantage or disadvantage. But it is a consideration you should have if you’d like to start a Xamarin project right now.

In an effort to consolidate the .NET platform, Microsoft is developing the evolution of Xamarin.Forms, named .NET Multi-platform App UI (MAUI). Xamarin.Essentials is also being integrated into this library, becoming MAUI.Essentials. As of writing, this new library is scheduled to come out to the general public in Q2 of this year.

.NET MAUI will use the same XAML as Xamarin.Forms, so the transition should be mostly painless. There are already guides and assistants provided by Microsoft that ease migrating from Xamarin.Forms to .NET MAUI. But they do not recommend making this transition at this time.

Also, current community plugins will need to be updated by their developers to this new version once it comes out. If you use any, be aware that it may take even more time than intended to transition to this updated platform.

Xamarin offers many benefits when it comes to the development of mobile apps, especially if you’re targeting multiple platforms and systems but want to cut down on developing for each platform specifically. Even though it has its downsides, the upsides of the flexibility and scalability it can bring to projects should not be understated.

If you’re looking to hire professional Xamarin developers for your projects, DistantJob can help you find in less than 2 weeks the top remote candidates that fit your company’s needs. 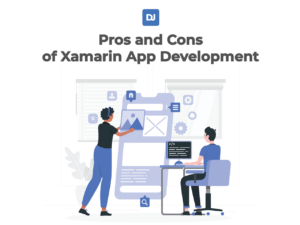