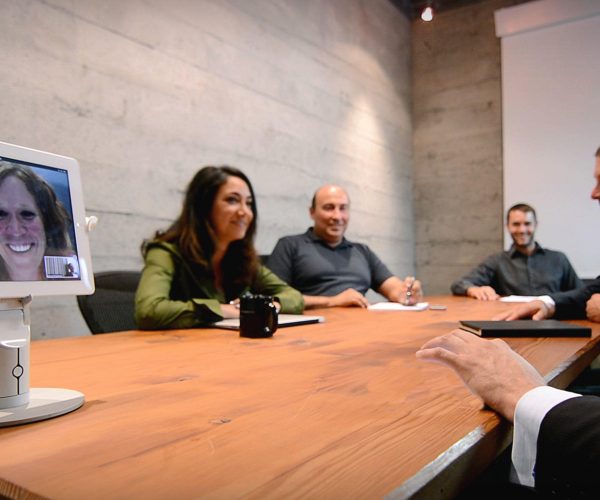 Are telepresence robots just a fad, or an actual benefit for companies with hybrid teams? We find out.

The technological climate of the world today has often made people wonder, should we be threatened by our robotic advancements? Indeed many people have publicly stated that they fear mankind will soon be overthrown by the very robots we’ve built. Siri is often accused of being self-aware and only pretending to be a helpful, but more or less troublesome, virtual assistant. Just the other day, my friend was worried she heard something under her bed and rather than go look herself, she taped a knife to the top of her Roomba and sent it in instead.

But have you ever stopped to consider that as robotics become more advanced, it only broadens our reach and increases our ability to help others? While we generally picture a runaway cyborg when we think of robotics, companies like Double are making it possible for people to have a physical presence in places that they’re nowhere near. This is particularly good news for those in the remote working field. Remote workers have the distinct advantage of having accessibility to more jobs than people who only have access to employment in their physical locale. As more and more companies recognize the trend, they too are jumping on board. In our recent article, we reiterated that:

Picture it. You’re walking down the hall, heading to the big meeting, when you’re soon joined by a robot heading the same way. Only this robot has the face of your developer from India on the iPad mount. Sounds like something out of a sci-fi? Not anymore. Market Watch did some research and with the development of robots assisting with telepresence, they’re finding that remote workers want the chance to be in the boardroom with everyone else.

“The quality of remote communication is uplifted by the robotic platform approach to connecting people located in different places. The visualization provided by the telepresence robot is not reproducible by the smartphone and large telepresence systems are not mobile. So ultimately all people will want access to telepresence robots in order to move around and see for themselves what is going on in another place.”

Some people may be wondering: isn’t video conferencing enough to attend meetings remotely? Well, the answer is it may be to some but as we mentioned in our article Success in the Virtual Boardroom, it may be difficult for remote workers to interact with those physically in the room. Video calls are limited to just one screen and one view of what’s happening in the boardroom or other meeting places. They’re perfect for face to face but when there’s more than one person talking, it can be a challenge to feel engaged and heard.

People who like to tread on other people’s dreams are often heard saying, “You can’t have it both ways.” Telepresence robots may finally prove these naysayers wrong. One of the nicest perks of being a remote worker is just that – working remotely from virtually anywhere with a strong Wifi signal. But the one drawback about being remote is you don’t have a physical presence in the office. If you need to talk to Bill from HR, who, inconveniently, is never at his desk and never answers his Slack, robots might just be the ones chasing Bill down in the breakroom. Market Watch also found that:

Telepresence robots allow people to work remotely while retaining some of the advantages of being physically present. In a way, the best of both worlds. The Optical Society (OSA) was so intrigued by the technology that they performed a study to see how well telepresence robots would do for of the office.

“Currently, OSA has 140 staff members—29 of whom participate in its telework program and 12 of whom work remotely full-time from locations like California, Florida, North Carolina, and Pennsylvania. ‘The goal was to provide another tool to our teleworkers that would allow them to feel more in control of their experience and provide the flexibility that a typical web collaborations tool might not offer.”

As an article in the International Journal of Advanced Robotic Systems points out:

“Robotic telepresence applications targeting at creating innovative telework scenarios must deal with the particularities of a different context. Solutions in this field emphasize the mobility of the robot in office environments and the interaction capabilities needed to support remote collaborations between coworkers.”

Or in layman’s terms, you can use a robot to track down and have a physical conversation with Bill from HR, while still in your bathrobe at home.

Remote workers aren’t the only ones set to benefit from telepresence robots. The healthcare industry has already seen a surge in telecommunication. According to ZDNet, with the help of robots, doctors who specialize in certain fields can consult and even help with surgery despite being millions (more or less) of miles away. OhmniLabs (another company that specializes in telepresence robots) understands the frustration of trying to participate remotely in meetings.

“The ability to read a handout or actually see what is written on the board is game-changing for anyone using telepresence robots.”

Companies like Cisco Systems are already reaping the fruits of telepresence robots and so are their remote employees.

Our well-titled article “Like it Or Not Remote Work is the Future of the Workforce” points out “53% of workers think that over half of the workforce will be remote by 2020 and 61% of office workers state that video conferencing will play a huge role in making that transition smoother.” With the development of telepresence robots, that transition just got even smoother and maybe a little more sci-fi.

If you’d love to see a remote worker wheeling around in your office but don’t have any on staff, it’s time to get a hold of us at DistantJob. Contact us here to get your remote staff off the ground.