Why Use Clojure? Here's How it Can Benefit Your Business - DistantJob - Remote Recruitment Agency

Why Use Clojure? Here’s How it Can Benefit Your Business

Clojure is a simple, very flexible, and reliable language useful for various projects. Its coding paradigm allows developers to build code organically and be more productive

Clojure is a dynamic programming language that has been growing in popularity in recent years, seeing adoption from many developers and companies. Big names such as Adobe, Amazon, Apple, Facebook, and Netflix (among many others) all use Clojure somewhere in their tech stacks. And apparently, developers seem to enjoy working with it, being voted the second most loved language in 2021’s Stack Overflow Developer Survey.

So, why use Clojure? Why is Clojure seeing such a rise in popularity? Let’s go over the main advantages of Clojure so you, too, can decide if it’s the right programming language for your business’ needs.

Advantages of Using Clojure In Detail

Being a Lisp language, Clojure is simple at heart, making ample use of brackets. As an example, Clojure’s way to sum two numbers is done like this:

Most of the code done on Clojure is an expansion of this simple building block, making it a good language to learn to program and develop in.

Clojure also features a powerful feature in the form of macros. Macros in Clojure allow developers to extend the language by defining syntactic constructs which other languages could only have with primitives or built-in support. Much of Clojure’s core functionality is made using macros.

One such example is when a macro provides Clojure with an if statement with a single section to execute in case the condition is true and forgoes the else section. It is defined as such:

So, in a manner of speaking, we’re using Clojure to extend itself. This makes the language easier to maintain and update.

It also allows developers to change the way Clojure inherently works to fit their needs. It’s not uncommon for Domain-Specific Languages to be developed using Clojure or other Lisp-based languages.

Concurrency was one of the key issues Clojure’s initial design wanted to solve, and it provides ample tools to help with and speed up their development.

The key feature that makes it possible are its Immutable Data Structures. This basically means that Clojure objects cannot be changed. When they need to be updated or changed, new objects with the updated information are created instead.

Clojure also features transactional references to allow safe variable usage in threads via a Software Transactional Memory (STM). An STM detects all transactions related to relevant objects during a thread’s lifetime and will usually resolve conflicts based on priorities. This is a much simpler system for developers to use as opposed to Lock-based programming.

Locking offloads the responsibility of implementing a lock system to the development team, making it more error-prone. Locking systems are also inherently first-come-first-serve, having no concept of priority, and issues with the system are usually harder to reproduce and debug.

The Clojure team also develops and provides libraries to develop asynchronous applications, such as core.async.

Clojure was built to run on the Java Virtual Machine (JVM) and, as such, has access and interoperability with the Java language and all its libraries and frameworks. This makes both Java and Clojure more versatile and able to solve more problems they couldn’t on their own.

Java is an extremely popular and widely used language, especially in large companies. By adopting a language that can be used alongside it, you are creating more opportunities to integrate your solutions into already established platforms from other businesses.

To call Java code in a Closure environment, all you have to do is use what is called the dot notation. Let’s see a small example:

Since “Hello World!” is a string (both in Clojure and Java), you can call Java functions on Clojure strings. Our Clojure code roughly translates to Java as:

Clojure code can also manipulate Java classes. Let’s use a HashMap to store users and their IDs:

You can also import the needed classes to make code less verbose if you’re going to use that class extensively.

As you can see, this interoperability brings many possibilities to the table and makes development more flexible. You get the best of both worlds: a dynamic language that can leverage the power of an object-oriented language with a robust set of libraries and frameworks.

Since Clojure runs on top of the JVM, it can run on the multitude of systems and platforms that it targets.

But Clojure is even more adaptable. And you can be integrate it into many more types of projects. It features a native implementation for .NET and a compiler for JavaScript, expanding its use possibilities.

ClojureScript makes it especially interesting for developers looking to use a language to create web-based applications’ frontend and backend. You can use pure Clojure to create the backend portion of your app and then compile part of that code to JavaScript to augment your frontend development with the same algorithms and logic used to develop the backend.

As of writing, stats on GitHub show that Clojure is most often paired with JavaScript, even more than Java itself.

If you’re looking for an easy-to-learn language that has extensive and varied applications in the development of solutions and apps, Clojure may just be what you need.

Don’t forget that if you’re looking to hire professional Clojure developers to bolster your company’s ranks, DistantJob can help you find the best candidates that match your culture and development needs. 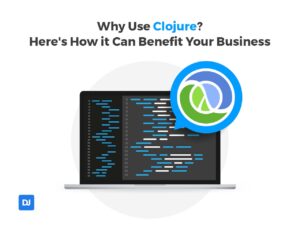