Virtual Accountability: How One Company Is Changing Remote Work 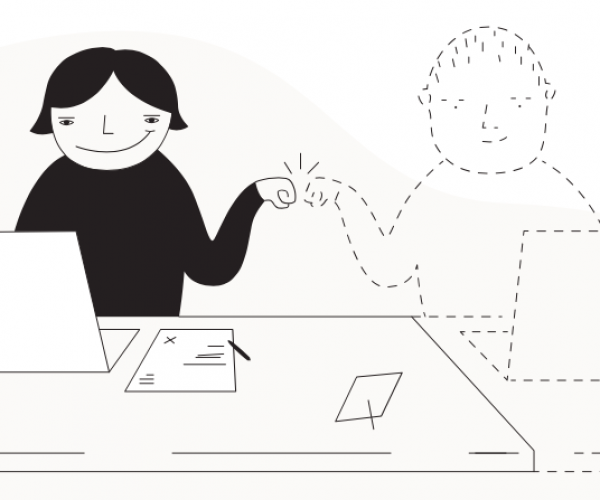 Isolation and lack of focus are examples of two problems that can afflict remote workers. And while they aren't always related, Focusmate is trying to offer a single solution for both. Find out how.

There are very few things in life more aggravating than someone looking over your shoulder while you work. The creeping feeling of your personal space being violated and the status of your work being evaluated. At one point in my life, I had one coworker who was so particularly keen on this that it made me want to cover my monitor and stare meaningfully at her until she got the hint and departed. For those still feeling the effects of the “Big Brother” era, you may be surprised to hear that nowadays, people are volunteering to be watched. With so many distractions available for remote workers, virtual accountability is starting to become a household name.

Unlike their in-office counterparts, who have coworkers to keep them accountable and on task, remote workers have the extra burden of staving off distractions all on their own.

One entrepreneur saw a potential need and Focusmate was born. Described as “a virtual coworker experience,” Focusmate allows remote workers a chance to hold each other virtually accountable for their work. So would it benefit your remote workers? In more than one way, the answer is yes.

In our earlier article 4 Ways to Prevent Isolation in Your Remote Team, we found that “For remote employees, this dearth of daily social interaction can sometimes leave us feeling isolated, anxious, and bogged down by negative thought patterns—a toxic combination that also carries consequences for employers in the way of productivity and turnover.” But Focusmate is far from a chatting site; how could it help remote workers? First, we need to understand how it works.

Virtual Accountability For Virtually Anyone

Company founder Taylor Jacobson was no stranger to procrastination and remote work. Focusmate evolved from his attempt to help a friend who was also struggling to stay on task.

They decided to Skype one another during their workdays. The call allowed them to keep each other company and be held accountable for their tasks.

“We’d message each other with every task to stay accountable. He was making a presentation, I was writing a blog article, which I can procrastinate for months. It worked insanely well — literally neither of us has ever been so productive.”

From that experience, Jacobson launched a company that would accomplish the same thing for complete strangers. Remote workers simply sign up on the website, pick the schedule where they would like to have virtual accountability, and Focusmate pairs them with someone who has also selected that particular 50-minute slot.

Both virtual coworkers spent the first few minutes greeting each other and relaying what they’ll each be working on, before the real work begins. For the entire session, each worker focuses on their self-appointed tasks and at the end, reports back to the other person on their progress.

Talking is not permitted; however, users have reported that just having someone in their virtual bubble helps encourage them to stay on task.

“It helps you get immediately into the zone of productivity via the incredibly simple solution of having a partner, live and present, working alongside you.”

5 Distractions in Remote Work – And How to Avoid Them posited:

“There’s no doubt that home is full of distractions, and opportunities to procrastinate. Whether it’s housework, hobbies or Netflix (with or without chill), we have a lot of competing demands on our attention. So what can you do to maximize your chances of staying on-task?”

Focusmate just might be the answer managers of remote teams is looking for.

Accountability and Communication- A Match Made in Heaven

Laziness is often blamed as the culprit of procrastination but that’s not always the case.

However, according to Men’s Health, procrastination may be a sign of another condition. “Procrastination is often linked with perfectionism and the fear of failure,” says psychologist Crystal Lee, Ph.D., owner of LA Concierge Psychologist. “There is such anxiety around getting something done perfectly and successfully that the anxiety hinders people’s ability to actually work on the project until the last minute.”

Communication is the number one asset AND liability for a remote team. It’s important to establish a good network if you haven’t already.

No one is immune to the allure of distractions and procrastination. With Focusmate as a potential tool and a well-established line of communication, managers may have just found a match made in heaven.

Remote Workers in a Virtual World

Most managers, traditional or otherwise, are almost always on the lookout for new and better ways to help their teams build and maintain production. For the unique challenges remote managers face, Focusmate might just prove to be the key to unlocking their teams’ continued productivity. In the future, remote teams may even be asked to schedule regular production sessions using the website or app. And there’s little sign of the “Big Brother” feeling we all feared in the 90s.

With one-on-one interaction and strict rules, the community aspect of Focusmate helps ensure everyone’s privacy. As psychiatry expert Professor Philip Asherson said, “the key element of this idea is making a commitment to somebody else.”

Focusmate provides a production-fueled environment that many remote workers are lacking; a chance to enjoy the luxury of a coworker, and a chance to hold each other and, more importantly, themselves, virtually accountable.

That’s one more powerful tool for your team management arsenal. And if you need to build or expand your team, well, is the way to go. With that, we can help! Get in touch, and DistantJob will find you the best in the world on whatever area of expertise your team is lacking – better and faster.