Python is currently the second most popular programming language, according to The Tiobe Index of September 2021.  While the increase in the demand has influenced how much a python developer earns, without a doubt, the two main factors that directly impact a python developer’s salary are location and level of expertise.

On average, according to Indeed, a Python salary is approximately $108,133 per year ($9,011 per month) in the United States.  The number, as expected, lowers down to low-level roles such as entry python programmers or junior-level programmers.

During this article, we crafted a Python developer salary based on different locations in the United States and the world as well as on the different levels of experience. Additionally, we provide details on the best places to hire Python developers.

Where to hire Python developers? In a different state? Country?

Whether you’re a startup or a big company, you’ll likely want to pay the best prices for the best quality. And although depending on where you live, you can get great Python developers; your talent pool expands when looking remotely.

For this Python developer salary guide, we took as references credible sources such as Talent.com, Payscale, Indeed, among others, that showcase the salaries of Python developers in terms of location and experience.

Among the Python developer skills to look for, communication becomes one of the most important ones. Developers are in continual communication with stakeholders, the leadership team, and other company members to build products that reflect their vision. They need to be able to explain complex processes and even terms in English words, and they need to work collaboratively, communicating with their teams when problems arise. According to Indeed, Python developers with solid communication skills tend to earn +8,.31% more than the average base salary.

Python Developer Salary in the US Based on Experience

According to more than 1.1K salaries in Indeed, the average salary of a Python developer in the United States is $108,133 per year. This equals a monthly pay of $9,011 and an hourly wage of $51.99. The salary varies depending on the skill set and level of experience of Python developers.

The table below highlights the salary of a python developer in the United States in terms of the level of experience:

Highest-Paying Cities for Python Developers in the US – Indeed

According to Indeed the highest paying states when it comes to Python developer salaries are:

These are its respective average salaries:

Highest-Paying Cities for Python Developers in the US – Talent.com

According to Talent.com, the 10 highest paying states for a Python developer  in the US are:

These are its respective average salaries:

Python Developer Salary in the World

To understand more about the difference between the price ranges, we compared 10 countries:

Here are the results of worldwide Python salaries:

For U.S business owners, hiring Python developers from Canada is a great solution in terms of language and time zones. Additionally, the salaries are lower. A Python average salary in Canada ranges between $90,000 and $95,000, which is more than 10K lower than the average Python developer in the United States.

Mexico is another popular destination for businesses that want to hire remote developers. Especially for American entrepreneurs who want to work with employees with similar time zones. What makes Mexico a great option are the salaries as they are significantly lower. Another advantage is that Mexico’s STEM education outperforms the USA as 25% of the country’s graduates come from STEM disciplines.

Brazil is becoming a hot spot for IT remote recruiters, as the country has a significant IT workforce, where 38.18% of them are under 24 years old. Additionally, despite that the countries native language is Portuguese, there are almost 6.18 million fluent English speakers.

According to a Skill Value report analyzing +550 technical assessments, Germany was among the top 10 countries with the best programmers. Although in terms of the average salary, the prices can range from $50,000 to $97,000, the country offers a qualified IT workforce.

Austria is another alternative for countries considering hiring remote python developers. One of its benefits besides having quality IT talent is that most of its population are English speakers. An impressive 73% of the population speaks fluent English – and the country has the seventh out of 63 countries on Educations First’s English Proficiency Index.

Ukraine is home to more than 20,000 software developers. The industry continues to grow, primarily because of the government that highly invests in the country’s tech education system. Additionally, Ukraine is becoming a popular location for companies recruiting remotely because of the low salaries.

Romania is another country from eastern Europe characterized by outstanding IT talent. Big tech companies such as Microsoft and HP started offshoring talent in the country, contributing to the country’s fast growth. There are currently more than 400 startups operating in the country.

India is one of the first countries companies think of when outsourcing or offshore IT talent. Because of the low salaries and the fact that most of the population speaks English, it is another attractive option.

The Philippines is one of the best countries to hire software programmers from. Besides affordable prices, 92% of the countries population speak English.

Where to Hire Python Developers?

While there are many tests and global assessments that evaluate programmers, there’s no way of knowing for sure where the best ones live or where to hire them from. This is why businesses need to have solid recruitment teams that help them identify which candidates are the right fit for the team.

In terms of money, the salaries are primarily different due to the living costs in each country. According to our research and comparison, these are some of the key takeaways:

Keep in mind that most of the time, the salaries displayed on different websites are not accurate, and developers might charge more than what’s expected. This, of course, will depend on the skill set you demand, along with the level of experience.

The key to hiring Python developers who charge affordable salaries and have the needed experience is to know where to look from them. From online resources to a solid network at DistantJob, we can help you hire a Python developer in two weeks.

As a leading remote recruitment agency, we have been helping businesses find and hire talented IT developers 60% faster than the industry average.  Contact us! 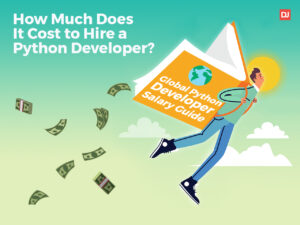