Virtual Reality (VR) has slowly become a technology used in various media and experiences. Up until recently, it was used mainly in large-scale theme parks as an attraction or medical and research facilities in laboratories and patient recovery centres. Nowadays, with the advancements in VR headset technology, the market has begun to slowly expand to common households. The search for VR development is increasing, and new technologies and libraries have surfaced in response (and continue to do so!). VR programming staff have become a necessity among many companies that have begun to target this technology.

But which language should you pick for VR programming? Let’s go over the most used programming languages for VR.

C# is one of the most used languages for VR development, and it’s all thanks to Unity. Unity initially started as a game development framework but over the past few years it has begun to slowly transition to an all-purpose media creation tool. It offers tools for developing many kinds of Virtual Reality experiences in one single package.

Besides that, Unity offers many tutorials and examples on how to code a VR experience. Anything that Unity can’t provide in terms of learning can be easily addressed by tapping into its large community.

C# doesn’t live in the VR space out of Unity’s back alone. StereoKit, for example, is a C# library for creating VR applications that you can implement in your existing project. Coupled with .NET’s powerful libraries, you can create VR experiences much more easily.

If you’re looking for a language with solid libraries and frameworks for VR development, C# is a good bet.

C++ has a long-standing recognition in the programming community as being a very performant and efficient language. It has been a staple for developing demanding 3D applications, especially videogames, for a long time, and it’s not going away anytime soon.

Unreal Engine is a C++ framework for 3D real-time software. Much like Unity, it offers tools to develop VR experiences.

If you want to develop native experiences for certain VR headsets, knowing C++ is a must. As an example, Occulus Rift’s PC SDK is written in C++.

Java has a community of VR developers mostly due to the Android platform since it’s the programming language for its native applications. Thanks to the massification of Smartphones and their subsequent use in low-budget solutions for VR headsets, Android has become one of the most popular targets for VR solutions, alongside other mobile platforms.

Since Android uses Java for its native applications, Libraries that target the Android platform, such as Google Cardboard or ViroCore, are also written in Java.

If you want to program VR experiences for Android natively, knowing how to program in Java is essential.

With the growth of the internet as a content delivery platform, languages tied to web development saw a boom in use as well.

JavaScript has become an almost universal language for internet content, be it web pages or apps. VR applications have become a subset of these web experiences, and many libraries surfaced to help developers work on the platform. And most of these are written in JavaScript.

Three.js is a JavaScript 3D Library that allows developers to build VR experiences. A few years later, A-Frame was developed on top of Three.js by providing an Entity Component System framework and was specifically made to build VR solutions.

As for other examples of VR libraries for JavaScript, you have Babylon.js, a web rendering engine that features tools to build VR applications, and ViroReact, a React Native library that allows its developers to quickly prototype and build Virtual Reality experiences using this framework.

If you’re trying to develop VR web apps, JavaScript will be instrumental to see your ideas come to life.

Python is usually not a language that one considers learning when delving into VR. However, some libraries and frameworks use it.

The biggest and best example is probably Vizard. It is a python-based software development platform made to create VR applications. It is used by many research facilities and universities, as well as NASA.

Besides that, many VR applications use Python as a scripting language, such as VRED, Autodesk’s 3D solution for automotive prototyping that allows designers to use and test their designs in a VR setting.

Python VR is not as big a community as others in this list, but it certainly has its place.

If you want to start developing VR apps, the best and most flexible languages to do so will be either C# or C++. They are the most used in a variety of VR experiences and, as a result, have the largest communities that you can turn to for help solving specific problems you can come across.

All other languages presented here are also good solutions but will inevitably be more limited in terms of the target audience they can reach. Despite their flaws, one of the biggest advantages of using multi-platform frameworks such as Unity or Unreal Engine is that it’s fairly easy to port your app to many different platforms.

If you’re looking to hire remote developers to help you build the next VR experience, be it .NET developers, Android developers, JavaScript developers, or Python developers, DistantJob can help you find the best matches tailored for your company and projects. 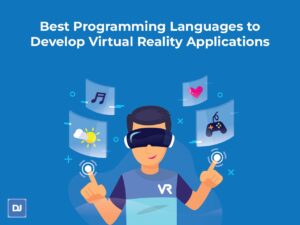