“My home is my castle” – The phrase doesn’t refer to the opulence and grandeur often found in centuries-old castles. Instead, it infers that people tend to feel the most protected, safe, and relaxed when in their homes, and that is what makes remote workers more productive.

COVID-19 has forced thousands of employees to work from home for a considerable amount of time. While there’s a need to state that remote work is not the same as working from home due to the pandemic, there have been businesses that could leverage the experience, and even decided to transition to being remote-first.

So… are employees more productive working from home? Some companies erroneously conflate contentment with laziness when deciding whether or not to allow their staff to work from home. However, more and more evidence shows not only that this premise is flawed, but that remote workers actually accomplish more at home than they would in an office setting.

Working from home increases productivity, and research proves it

You might have heard of the nine-month study on the productivity of call center employees who chose to telecommute. The researchers were shocked to learn that the remote workers answered 13.5% more calls than their in-office counterparts – which equates to about three extra workdays of productivity per month.

And if we talk about money, telecommuting represents a win-win situation for employees and employers. Ctrip noted that over the course of the nine-month study, the company saved $1,900 per employee on expenses such as office space rental, supplies, utilities, and other costs.

A remote worker productivity survey revealed that remote employees work on average 1.4 more days than those who work at an office. And during those days, they get more done. This is mostly given by the ability to focus and having fewer distractions.

This survey revealed that a whopping 77% of respondents were more productive at home, with 52% adding that they’re less inclined to take time off from work.

Why are employers reaping the profits of increased productivity by remote workers? Because these employees are experiencing benefits on their own.

Working from home increases productivity and this is not just about not having John talk to sally all day just next to your office spot. The Airtasker survey mentioned above shows that remote employees saved on average $4,523.04 per year in commute, and had 408 more hours of free time.

But why are employees more productive? Is it just because of the fewer distractions? Although not having this constant office sound playing like this horrible song that got stuck in your brain all day helps, there’s another reason: engagement. According to a report by Gallup, employees who work from home show greater levels of engagement.

The same study found that not all perks companies offer are attractive to employees. Certainly not that horrible machine that provides a beverage that’s everything but coffee. What employees really want, according to this report, are benefits related to autonomy, flexibility, and the ability to lead a better life.

The State of Remote Work of 2019 by OwlLabs found that:

Having more flexibility allows employees to design their days and have a positive work-life balance. Therefore, they are more productive.

Employees who work from home are also more productive because they take fewer sick days. According to a survey by Indeed, employees working from home take 50% less days due to illness.

Why is this? Sharon Koifman, Founder and President of DistantJob, explains it in this video.

Finally, many of the problems that are believed to accompany a work-at-home situation simply aren’t materializing. According to the survey by Airtasker, 44% of remote employees are friends with their coworkers and have non-work related conversations.

And even 31% of the people working from home claimed these conversations helped them complete work, compared to 35% on their office counterpart’s side. This means employees feel as connected to their coworkers (if not more so) than if they were in the same physical location.

Also, Ctrip observed that attrition rates among remote workers were half of those recorded among the non-telecommuting populace over the course of the study.

These benefits aren’t limited to remote workers based in the U.S.; in fact, a growing number of companies are employing people who live thousands of miles away. Not only do these faraway remote workers exhibit the same bump in productivity, but their compensation requirements are remarkably smaller than their American counterparts.

If your company is thinking about hiring remote workers, be sure to explore the advantages of partnering with DistantJob, a remote recruiting agency that has been at the forefront of the industry for many years. Get in touch with us today to see how you can start saving money – and improving productivity – with remote workers. 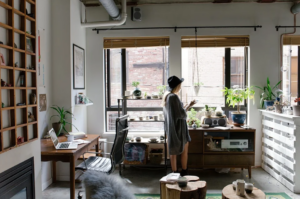 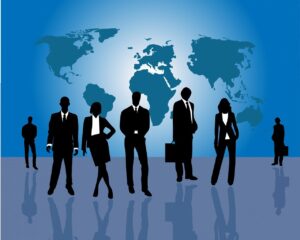 HR For Startups: A Simple Guide

Is HR for startups a good ides? Big, established companies usually benefit from having large, well-trained teams to handle their Human Resource (HR) needs, with […] 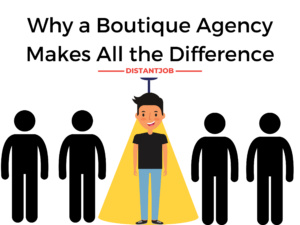 Specialist Recruitment: Why a Boutique Agency Makes All the Difference